Her Royal Highness The Duchess of Cambridge has hailed the “incredible” work of children’s hospices in a personal message of support during this year’s national awareness week. Her Royal Highness is Royal Patron of East Anglia’s Children’s Hospices (EACH).

The theme for this year’s awareness campaign is ‘For The Children’ and The Duchess has asked the public to join her in thanking the 54 children’s hospices across the UK.

She wrote: “For any parent, coming to terms with the news your child has a life-threatening condition and may die young is heart-breaking and incredibly frightening. Families can often feel isolated, but having the support of a children’s hospice means they don’t have to face that future alone.

“Every day, the UK’s 54 children’s hospices are a vital lifeline for families caring for a seriously ill child, and over the last ten years I have been privileged to see first-hand the incredible work they do.

“This year, the theme for Children’s Hospice Week is ‘For the Children’, reminding us all that as well as providing expert care, children’s hospices bring joy, fun and play to brighten each day and help families make the most of their lives together, no matter how short.

“This Children’s Hospice Week, I hope you’ll join me in celebrating the extraordinary work they do and thank them for the life-changing care and support they provide to children and families going through the toughest of times.”

EACH supports families and cares for children and young people with life-threatening conditions across Cambridgeshire, Norfolk, Suffolk and Essex.

The Duchess is celebrating her tenth anniversary supporting EACH, having become Royal Patron in January 2012. In the decade since, she has seen first-hand the support children’s hospices provide to families caring for seriously ill children.

Her maiden public speech came when officially opening The Treehouse, in Ipswich, in March 2012. She then cut the ribbon at The Nook, EACH’s hospice in Norfolk, in November 2019. This came after attending the launch of a fundraising appeal in 2014 and visiting its former hospice near Norwich, Quidenham, in 2017.

The Duchess also paid a return visit in June 2020, joining families to plant a new patio garden and transform the terrace area at The Nook. She sourced sensory plants and flowers for it ahead of her visit, which came during Children’s Hospice Week.

Amongst many other visits and events, The Duchess has also previously visited Milton and opened EACH’s shop in Holt, Norfolk, in March 2016.

Children’s Hospice Week is the only week of the year dedicated to raising awareness of children’s hospice services across the UK. The Duchess has lent her support every year, including very personal written and filmed annual messages of support.

EACH Chief Executive Phil Gormley said: “Children’s Hospice Week is a time to celebrate and raise awareness of the incredible work children’s hospices do for children and families facing the unimaginable. It is an important week for our staff and volunteers, as well as the children, young people and families who need our care, and we very much appreciate and value The Duchess’s support.

“In the last decade, she has been a wonderful Royal Patron. Her interest and profile has projected our charity and the importance of children’s hospice services onto the national and international stage and it is appreciated by everyone at EACH. For all involved, it is a huge privilege, as much now as in January 2012.”

Andy Fletcher, CEO for Together for Short Lives, added: “The Duchess of Cambridge, as Royal Patron for EACH, is a fantastic ambassador for seriously ill children, their families and the children’s hospices they rely on.

“The Duchess’s support for Children’s Hospice Week over many years has helped raise awareness, so more families understand the lifeline care hospices provide, and all they do to bring joy and fun to families’ lives – giving them the chance to be parents, not carers. We join The Duchess in celebrating the lifeline care children’s hospices provide for families facing the unimaginable.

“As The Duchess says, hearing the news your child will die young is heart-breaking. Families often tell us they feel isolated and alone, and just don’t know where to turn to for support. That’s why children’s hospices are so vital. Everything they do is ‘For The Children,’ helping families make the most of every moment, whether that’s for years, months or only days.” 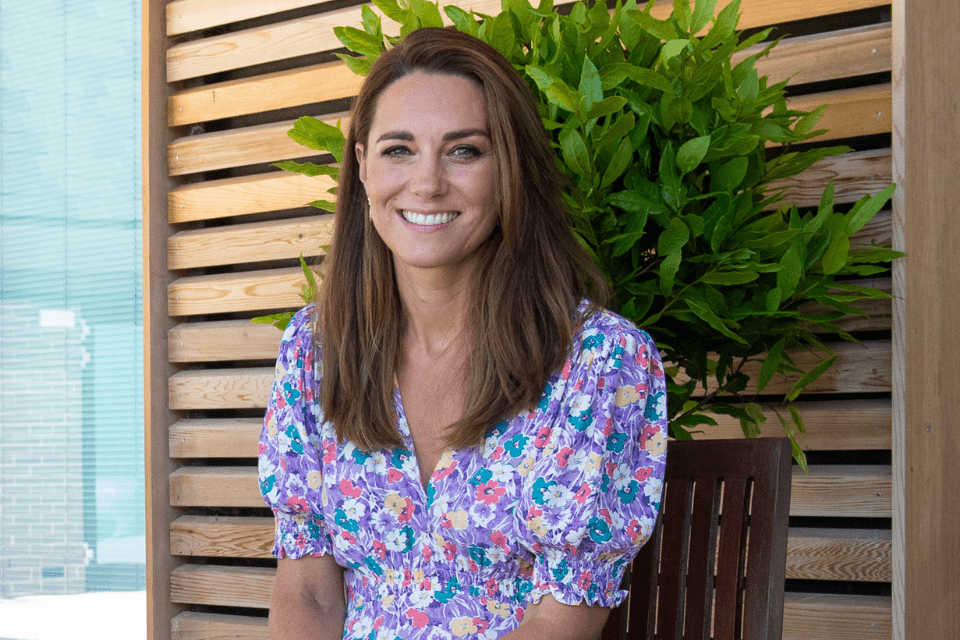 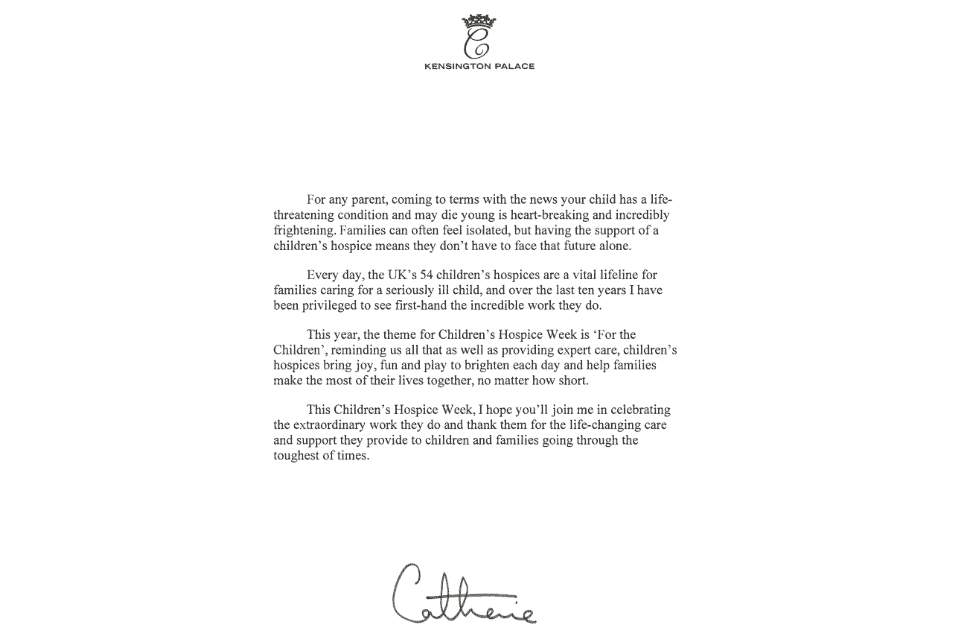