Thirteen-year-old Xanthe Carter, from Kersey, contracted pneumococcal meningitis, a life-threatening infectious disease that causes inflammation of the layers that surround the brain and spinal cord, and affects only one in 6.5 million children, when she was just nine months old. She had a major stroke as a result.

Parents Hugo, who works in HR, and Jessie Carter, an Art Psychotherapist, were told Xanthe would not survive, however, she defied the odds. Xanthe has complex medical needs, including chronic epilepsy, and requires 24/7 supervision. She can speak a few words, but is mainly non-verbal. Despite her difficulties, Jessie says Xanthe is cheeky, giggly and in many ways a true teenager, with a will to be part of the world and do as much as possible.

“It’s the illness you learn about as parents and you dread, never imagining it might happen to your child. Xanthe wasn’t expected to survive her illness and the professionals involved in her care were never optimistic she’d be able to walk or use her right side due to the stroke damage, but with a huge amount of love, support, encouragement and patience from her family and therapists she has learnt to walk, and has a few words. Though her prognosis is far from clear, she loves life.”

Xanthe has accessed EACH care since she was three years old. Music therapy sessions have been integral in her having a form of communication and connection she can be in charge of, whilst she has also enjoyed short breaks at The Treehouse, EACH’s hospice in Ipswich. As a family, the Carters attend various Christmas events put on by The Treehouse and also enjoy Treefest, an annual music festival in the grounds of the hospice.

Xanthe’s brothers, Milo, 14, and Otto, eight, have both attended EACH’s sibling days. Planned care activities such as these cannot currently take place face-to-face as EACH helps families shield their vulnerable children from the effects of COVID-19.

Otto said: “When Xanthe goes to the hospice it gives us some time on our own and we can do things my brother and I want with my mum and dad that sometimes Xanthe wouldn’t enjoy or want to do. It gives everyone a chance to do their own things as well. Without the hospice things wouldn’t be easy because Xanthe wouldn’t have her own time to have one-to-one care and do the things she likes.

“I really like the siblings days when we make things to take home. They always have really fun activities. I remember the Easter day when we made lambs from marshmallows, which was really fun. I like to be with my friends who have brothers and sisters like mine. No-one else at school has, so it’s good to have friends who understand what it’s like sometimes. It’s nice to have a special day just for the brothers and sisters, and I feel proud to be a carer for my sister.”

Jessie continued: “Otto was introduced to the sibling days by Milo, who used to go. We really wanted them to know they weren’t alone in having a disabled sister who needed a lot of care and attention. We wanted them to feel special because they are! Sibling days help to remind them they aren’t forgotten and that they deserve special treats and activities for all they do for their sister.”

Whilst the sibling days are currently unable to go ahead, Otto has decided to try and raise some money for EACH by selling sunflowers.

He explained: “My aunt gave me some sunflower seeds and mummy and I grew them. We started this as part of a science lesson when I was doing home schooling. In the end we had about 30 plants, which was too many for our garden! I suddenly thought I could sell them like other people sell plants by the side of the road and my neighbour, Pat, gave me lots of pots to help. I decided to sell them for the hospice because I miss the sibling days and it’s a special place for our family.

“I sold all 30 plants in two days to friends and passers-by, and lots of people gave donations, too! I’ve got 90 more sunflowers growing now and will be selling them over the summer when they’re ready. I want to raise LOTS of money! It’ll be nice to raise some money and give it away rather than have it ourselves.”

Jessie added: “Selling the sunflowers was entirely Otto’s idea. He’d wanted to do a cake sale this term at school for the hospice, but obviously that isn’t going to happen now. He’s enjoyed making a sign to sell them and is keen to get everyone in the village where we live to buy at least one or two plants. We’re hugely proud of Otto and what he is doing.  He hasn’t done any fundraising before.”

The COVID-19 pandemic has had a huge impact on families like the Carters. Jessie said: “As keyworkers we’re both wanting to be able to do our part and support the people we work with and for, but this has been very difficult because of school closures and Xanthe’s carers not being able to work. Xanthe has found the changes to her routine extremely difficult and stressful, and she’s used sign language to ask for her school friends and carers constantly. She’s fortunate that she’s not needing to shield at this time and, therefore, she’s been able to access some limited support from social care respite so that we can continue to work. We’re grateful for the support we’ve had from them, but it’s quite exhausting managing everything and everyone’s needs. It’s always nice to receive a phone call from services to say hello and check in with us, but we’re all looking forward to seeing and giving big hugs to our families and friends.” 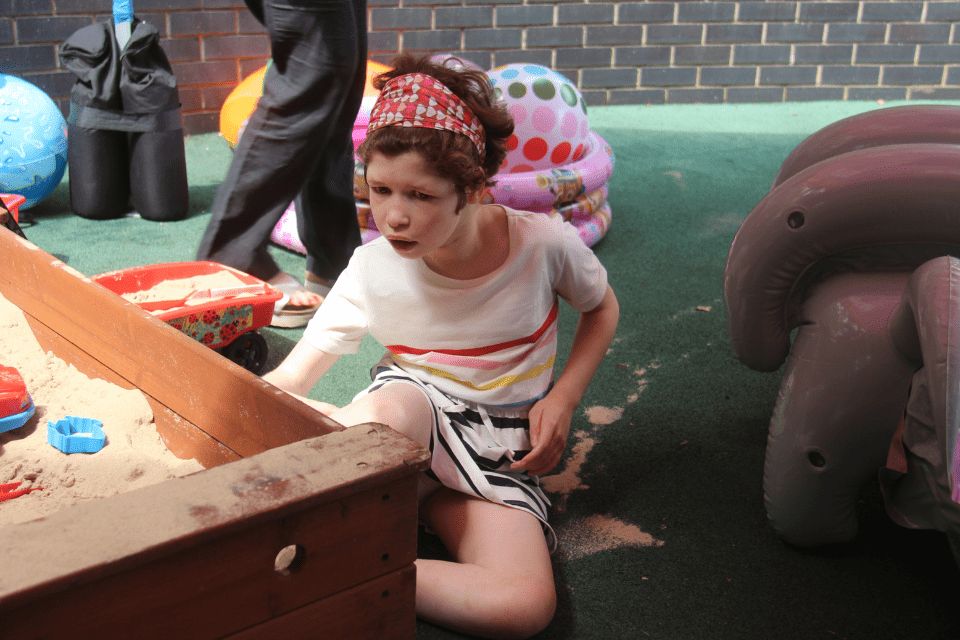