Ipswich Town fans are being urged to dig deep and support a fundraising ‘phenomenon’ in aid of East Anglia’s Children’s Hospices (EACH).

The idea comes on the back of the Blues’ successful #PackOutPR promotion – an initiative offering discounted tickets for festive fixtures against Sunderland, Wycombe Wanderers and Lincoln City.

Town fans went one step further and generously got behind an online campaign to buy tickets for fans who, for financial reasons, would otherwise be unable to attend the games.

Supporter Matt Cattee had the idea and an incredible £12,500 was raised thanks to the backing of fellow fan and podcaster Richard Moss.

Now Richard is switching his attention to EACH – and encouraging people to keep giving generously in the run-up to Christmas.

His new fundraiser has already gleaned £780 and he is setting his sights on cracking £1,000.

“The #PackOutPR campaign was massively successful,” said the 45-year-old, who has been watching Ipswich since 1984.

“It was crazy and overwhelming and I never dreamt we’d raise so much.

“I thought perhaps 20 or 30 people might get involved but instead we raised enough to buy around 500 tickets for each of the Sunderland, Wycombe and Lincoln matches.

“There had to be a cut-off and now we’re throwing all our weight behind raising more money but this time for EACH.

“It’s an amazing charity and a very special one right here in the heart of our community.

“You can’t help but be touched, humbled and grateful for the work it does and it seems a particularly poignant time to raise money, in the build-up to Christmas.

“The thought of helping people and potentially putting smiles on children’s faces is a lovely one.”

EACH supports families and cares for children and young people with life-threatening conditions across Suffolk, North Essex, Norfolk and Cambridgeshire.

It has a hospice, The Treehouse, in St Augustine’s Gardens, Ipswich, as well as The Nook, just south of Norwich, and one in Milton, near Cambridge.

“I appreciate many people have already dipped into their pockets once,” said Richard, who lives near Huntingdon, in Cambridgeshire, with wife Suzanne and watches his beloved Town with sons Elliott, 17, Oliver, 13, and Archie, 11.

“Hopefully they’ll be willing to donate again, though, especially for such an incredible cause.

“I know many people are holding fire until payday at the end of the month so hopefully there’s still plenty more to come.

“We’ll keep campaigning for another couple of weeks and then hopefully be able to hand over a nice sum of money.

“This whole experience has been amazing and reflects the buzz around the whole club at the moment. People are feeling genuinely positive and enthusiastic and want to get involved.

“It’s also a bit of a triumph for social media. It gets a bad press, as do football supporters in general, but this shows real generosity.

“Put the two together and it’s very powerful – a real phenomenon.”

EACH Community Fundraising Manager Tina Burdett said: “We’re delighted to hear about this campaign and our thanks go to Richard and his fellow Ipswich supporters.

“Hopefully fans continue to give generously, safe in the knowledge all money raised will help us provide care and support for children, young people and families across East Anglia.” 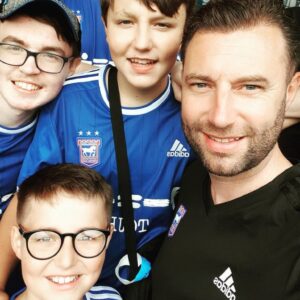 “There were big smiles everywhere you looked” – fun-lovers have a splashing time and manage to raise more than £24,000

Read all about it! Holbrook’s storybook trail is a colourful way to raise funds for EACH