Shop volunteer Trudie Spearman has a special and personal connection with East Anglia’s Children’s Hospices (EACH).

Grandson William, now 22, received care from the charity and spent time at its hospice in Ipswich, called The Treehouse.

Trudie says witnessing first-hand the support he received gave her a deeply-embedded motivation to get involved and help.

She started volunteering at EACH’s shop in St John’s Street, Bury St Edmunds, when it opened in October 2010.

Now, more than a decade on, she is still as committed as ever and doing exactly the same shifts on Wednesday and Friday afternoons.

“I enjoy it very much and love being here,” said the 73-year-old, who lives in Bury.

“I’ve always worked in retail and love being behind a till, talking to customers.

“We have lots of regulars and that interaction is something you miss when you retire.

“Working on the till might not be for everyone, though, and there’s a huge variety of jobs within the shops taking into account people’s interests.

“It’s about trying to make the most of their skills and, in my experience, the shop managers are very good at making the work interesting for volunteers.

“It’s also extremely rewarding because we’re helping raise money for a very good cause and that’s something I feel strongly about, because of William.

“He has tuberous sclerosis, which results in benign tumours growing in soft tissue. The brain is mostly affected but he has tumours in his eyes, kidneys and small ones in his lungs.

“He’s had two major brain operations and is brain-damaged as a result.

“He also has epilepsy, although this is mostly controlled by drugs.

“We were told when he was first diagnosed he would live until he was about ten.

“Thankfully, however, there have been huge developments in brain surgery and medication during recent years and he’s fairly well at the moment.

“At the beginning, our daughter had nowhere else to turn but the support she received gave her some respite and everyone was very kind.

“At times it was touch and go but during those moments there were always staff on hand to nurse us through it.

“As a result, I’ve felt very connected and involved ever since.”

Trudie was speaking during EACH’s We Need You campaign, which launched last week and runs until Friday.

The aim is to recruit more shop volunteers like her, to help in one of the charity’s 44 shops across East Anglia.

Trudie would recommend it to anyone and has already used her powers of persuasion to recruit others.

Among those to have been tempted to get on board is husband Alan, who helps with Portable Appliance Testing (PAT) in the Bury shop.

“He gets a lot of enjoyment from it and has been volunteering for three or four years, ever since retiring,” said Trudie.

“I’ve recommended it to others, too.

“I’m certainly not someone who gives the hard sell but by telling people how much I enjoy it I’ve managed to recruit a couple of others.

“I tell them that we have a whale of a time here and it’s true.

“We’re a very happy bunch and a lot of us have done it for a long time, so know each other well.

“Volunteering is a great way to spend your free time and, as well as supporting such a worthy cause, you’re giving something back to the community.

“I’ll always do extra shifts if I can or if I’m needed but the two days I always do are Wednesday and Friday afternoons.

“They were the shifts I was given when I very first started and I’ve done them ever since.” 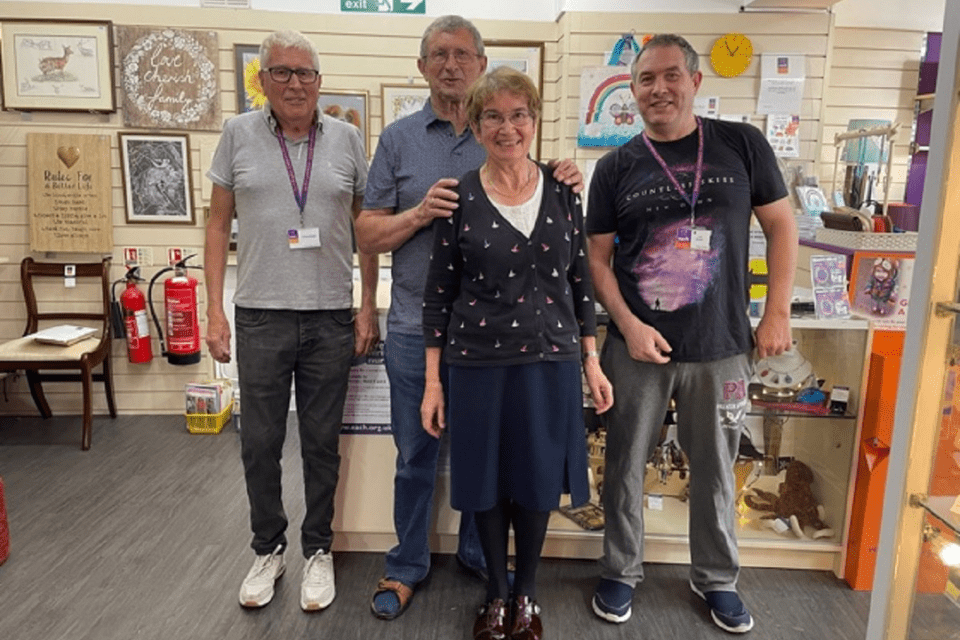