An inspirational eight-year-old with life-threatening health conditions enjoyed a “celebrity moment” after cutting the ribbon at a new supermarket. Erin Sadler, who has a number of complex issues, including some that affect her heart, kidneys and liver, performed the duty at Morrisons, in Little Clacton.

She cut the ribbon ahead of the store’s official opening the following morning and, along with a group of local schoolchildren, was given a guided tour. Erin lives in Ipswich Road, Colchester, and is a regular visitor to the East Anglia’s Children’s Hospices (EACH) base in Ipswich, The Treehouse.

Mum Helen said: “Erin was thrilled to be invited and given the opportunity to cut the ribbon. It was another little ‘celebrity moment’ for her and it’s lovely when people have read about her and followed her story. They’re excited to see her and say they feel they know her. They say she’s an inspiration and hearing that from others makes me very proud.

“I see it as part of her legacy and that’s why we jump at the chance to do things like this, because I want as many people as possible to see her beautiful, smiling face. Erin has had a lot of suffering in her short life so deserves to have fun.”

A major fundraiser inspired by Morrisons to support charities like EACH recently hit the £1 million-mark. The supermarket giant is working with national charity Together for Short Lives, which supports the UK’s children’s hospices, including EACH, which cares for children and young people like Erin across North Essex, Suffolk, Norfolk and Cambridgeshire.

It is part of a flagship three-year-partnership launched in February. The hope is to raise £10 million over the course of three years and in just over four months the figure already proudly stands at over £1m. Erin requires care 24 hours a day, seven days a week and Helen is a long-standing champion of EACH.

She spoke openly about the care and support her and her daughter receive as part of the publicity launching the Morrisons and Together for Short Lives partnership. Wendy Giles is a Morrisons’ Community Champion for the Little Clacton store, along with Stacy Andrew.

She said: “We were absolutely delighted to welcome Erin, Helen and grandad Philip along on Wednesday afternoon (6th July). She’s a very brave, special little girl and I’ve followed her story online. To have the chance to meet her for the first time was a real honour and privilege.”

Erin loves craft activities and cutting up sponges and she was presented with a basket of coloured ones as a thank you for attending. Helen was also interviewed during a media launch day for last year’s Happy Christmas Ipswich comedy spectacular at the Ipswich Regent.

A powerful film about Erin was shown during the interval of the show, which raised more than £90,000. 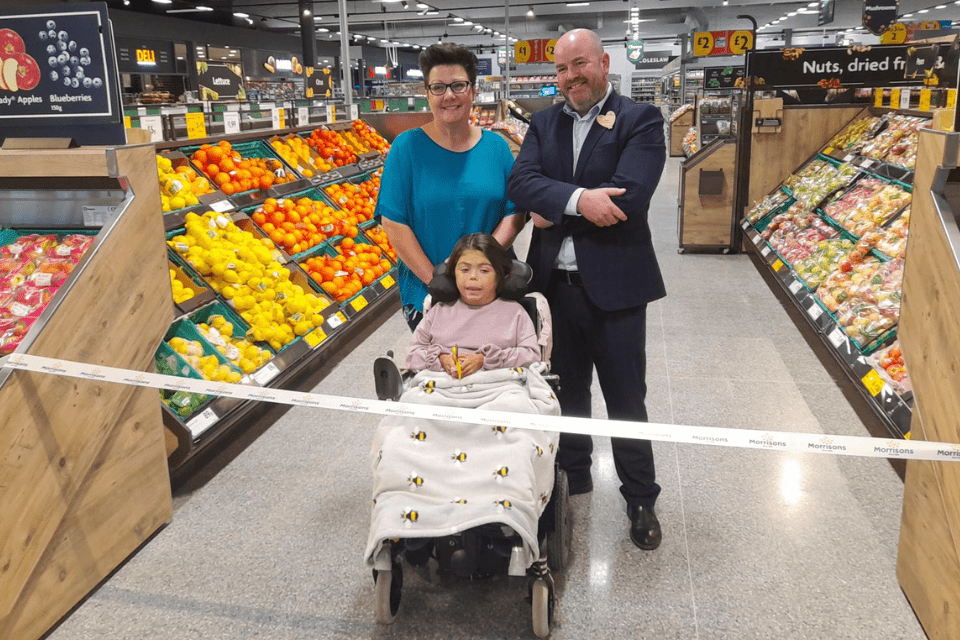 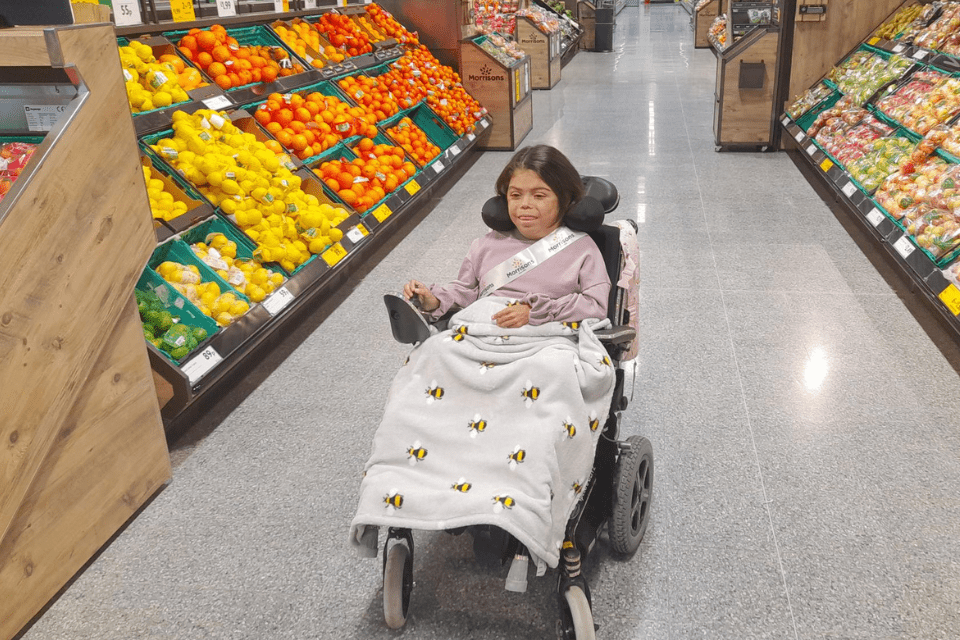 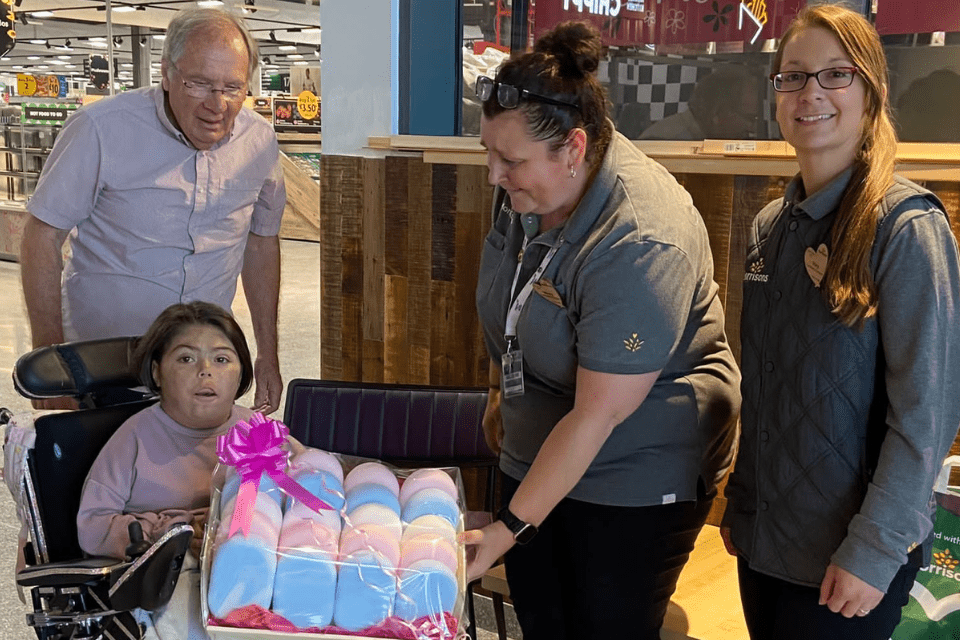 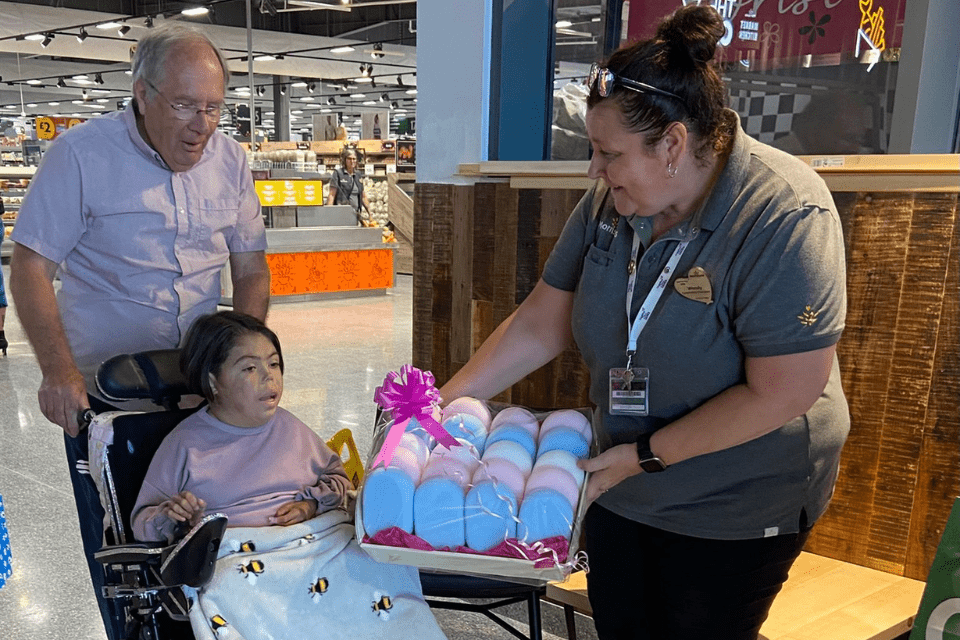 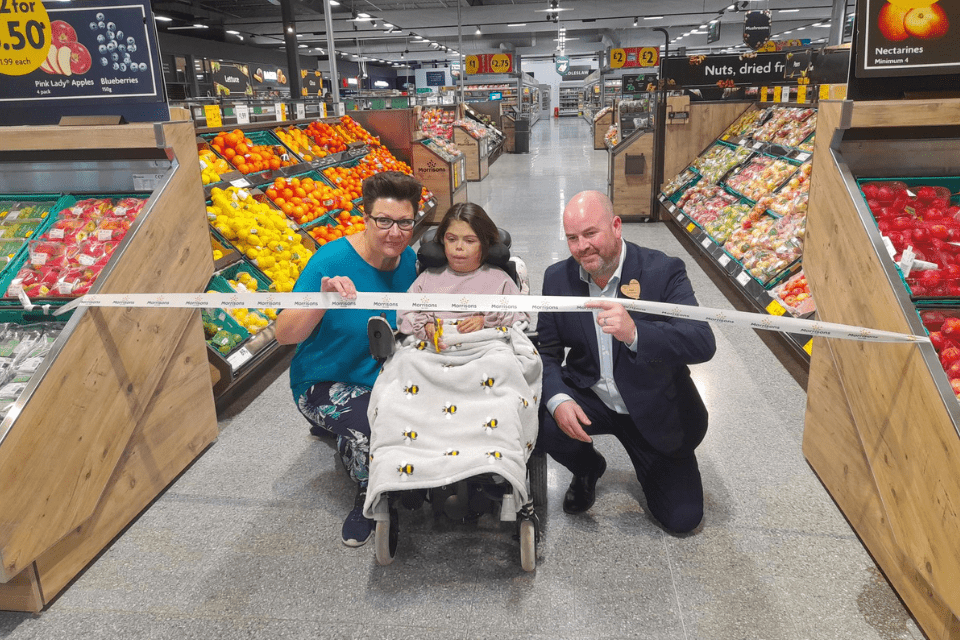