Two adventurous pals enjoyed the “adventure of a lifetime” after travelling across Sri Lanka in a three-wheeled tuk tuk and raising more than £2,500 for East Anglia’s Children’s Hospices (EACH). Jon Wilson and Ross Chilcott, directors at Bury St Edmunds-based Sky Access UK, took on the 400km challenge as part of Ride 4 Charity.

The annual expedition sees teams navigate the island’s winding roads in three-wheeled tuk tuks and Jon and Ross raised funds for EACH, which supports families and cares for children and young people with life-threatening conditions across Suffolk, Cambridgeshire, Essex and Norfolk.

The duo had the charity’s distinctive branding wrapped around their customised tuk tuk and have raised just over £2,500. Jon, 42, who lives in Kentford, just outside Newmarket, said: “It was a brilliant experience and the adventure of a lifetime, exploring beautiful Sri Lanka.

“It certainly lived up to expectations and is definitely something I’d love to do again, if I got the opportunity. We met lots of great people, all raising money for excellent causes, and it was certainly eye-opening – a real cultural experience. One day I was about to go for a swim and a guy told me not to, because he’d just seen a crocodile. It’s not the kind of thing we normally have to think about!”

“It was amazing,” said Ross, 38, who has two children and lives in Newmarket. “In addition to the actual travelling, we had surfing lessons, went to a big game camp, a sea turtle sanctuary, took a jeep ride through a safari park and hiked through a rainforest.

“We saw some amazing scenery and the people were outstanding. We saw a lot of economic hardship and there were political protests going on, some of which we came into direct contact with on our travels. However, everyone was very friendly and they’re clearly keen to welcome tourists, in order to boost the country’s economy.”

In addition to the protests, Jon and Ross, who have been friends and colleagues for years, encountered other hairy moments during their expedition. “At one point we nearly veered off the road into a ditch,” said Ross.

“We had some extreme weather, from baking sunshine to pouring rain, and we also came across power cuts and diesel shortages. In addition, social media was banned as a result of the political protests so we couldn’t send as many pictures home as we would have liked.”

Jon and Ross were always adamant they wanted to raise money for EACH. They already have ideas for future fundraisers, including a skydive, a go-karting endurance event and signing up for EACH’s Pier to Pier walk on 25th June.

Dad-of-three Jon said: “A friend’s son had a brain tumour and I went to visit him with my wife at Addenbrooke’s Hospital, in Cambridge. I remember walking out and tearing up, feeling emotional about what I’d seen. Thankfully, he’s fine now but there were a lot of children there having similar treatment.

“It was hard to see and that’s why it felt great to be supporting a children’s charity, especially being a father myself.” Jon and Ross had to take a short driving test when they arrived in the Sri Lankan capital, Colombo, on 3rd April.

In the next few days they travelled to Hikkaduwa, Weligama, Udawalawe, Ella, Haputale and Nuwara Eliya before flying back to the UK. The duo’s fundraising page is still open. To make a donation, head here. 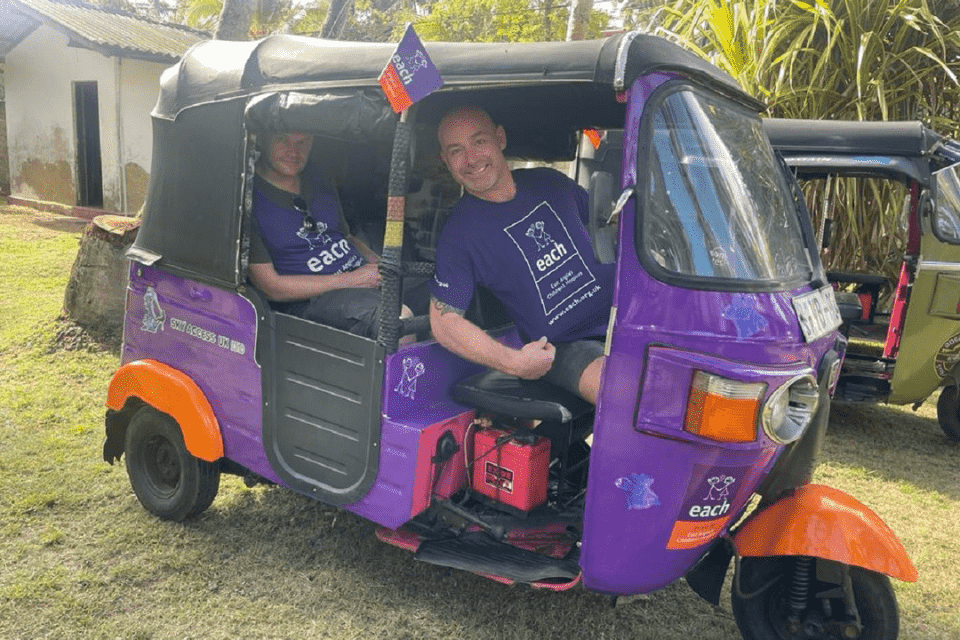