Generous runners forgo their entry fees from the cancelled Ipswich Twilight races and raise £15,000 for EACH

Kind-hearted runners raised a phenomenal £15,000 for charity after donating their entry fees from two races cancelled due to Covid. Ipswich JAFFA Running Club reluctantly pulled the plug on last year’s popular 5km and 10km Twilight road races, which had been due to take place in May and July respectively. It followed the cancellation of the 2020 races, again because of the pandemic.

Runners were asked if they would like a refund or if they would be willing to donate their entry fees to East Anglia’s Children’s Hospices (EACH). Amazingly, they responded in force and a cheque for £15,000 was recently handed over at EACH’s Ipswich hospice, The Treehouse.

Carl Ashton, assistant race director, said: “While it was obviously disappointing to cancel our races again, the safety of participants, organisers and our local community had to take priority. However, we’re delighted something positive came from the situation. It’s a huge amount of money and very generous of so many runners to donate their entry fees. It’s been such an uncertain time and a lot of people have suffered financially, especially during the pandemic. For them to respond as they did was an incredible gesture and it was our pleasure to hand over the cheque at The Treehouse.”

The Twilight road races first hit the streets in August 2015, organised by Ipswich Jaffa in association with Ipswich Building Society, Suffolk New College and Ipswich Borough Council. They have since been split into separate events and moved to their current locations on Ipswich Waterfront and Portman Road. The 10k event is an established fixture in the running calendar, attracting runners of all abilities and ages. The 5k race includes waves for all ability 5k runners, a Daily Mile for schoolchildren and a 2k ‘Most Active County’ Family event.

EACH was the chosen charity of event sponsor Ipswich Building Society (now Suffolk Building Society). Although that arrangement has now ceased, Ipswich JAFFA says the organisation will again be its charity partner for 2022.

Anyone signing up for this year’s Twilight races has been encouraged to set up their own Just Giving pages and raise money for EACH, which supports families and cares for children and young people with life-threatening conditions across Suffolk, North Essex, Norfolk and Cambridgeshire. The 5km race took place on 14th May and the 10km is being held on 15th July.

Billie Nugent, EACH corporate fundraiser for Suffolk and East Essex, said: “We’re extremely grateful to all the runners and everyone at Ipswich JAFFA. It’s an incredible donation and one that will make a real difference, in terms of helping us provide our vital care services. We’re also thrilled that the club have chosen to renew their partnership with us. It’s fantastic news and we wish all the members the very best of luck both with their running and fundraising in 2022.” 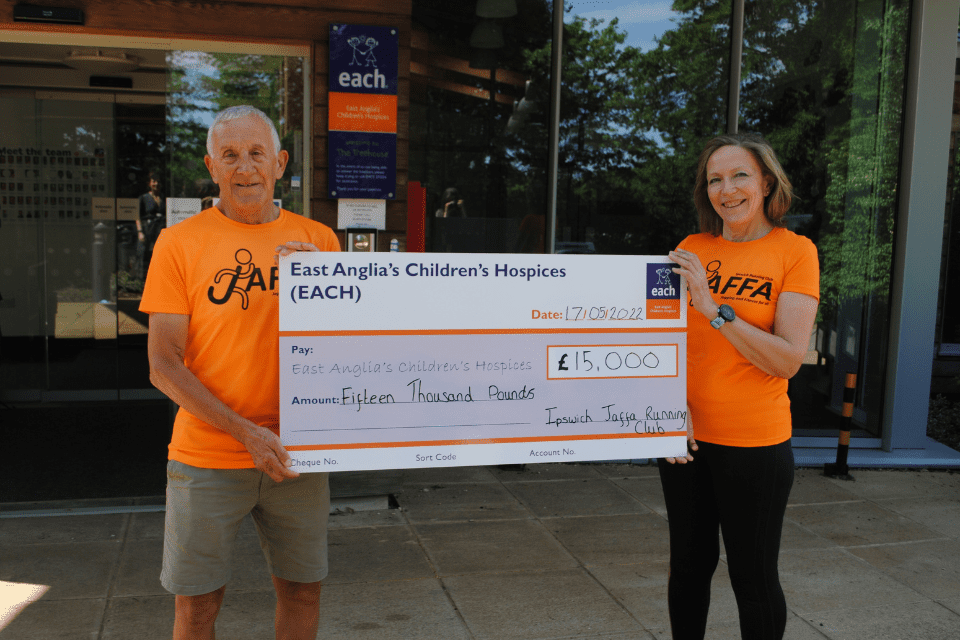