Kind-hearted golfers clubbed together to raise a staggering £34,180 for East Anglia’s Children’s Hospices (EACH).

Members of the Gog Magog club, in Shelford Bottom, just south of Cambridge, got in the swing of things during a series of fundraisers throughout 2021.

The club’s marque event was its Captains’ Charity Day, organised by captains Gareth Jones and Sharon Turvill and held in July.

Nearly 200 members took part and played on a rolling basis throughout the day, with a popular auction raising extra funds.

Gog Magog manager Brad McLean said: “The generosity of our members never ceases to amaze me.

“Every year they dig deep and really support our captains’ chosen charities.

“Often the men’s and ladies’ captains support different causes but this time they were united in raising as much as possible for EACH.

“There were lots of highlights but the main one was our Captains’ Charity Day.

“It was a very fun and memorable day and, in addition to members, I’d also like to thank local businesses because lots got involved and sponsored us.”

Other events ran throughout the year, including quirky things like a raffle to win a dedicated parking space at the club.

There were various competitions, challenge matches and social get-togethers while the club’s ladies’ section held a successful coffee morning.

In addition, members’ golfing goods and merchandise were either donated to EACH or sold via a dedicated eBay account.

Brad has a personal connection with EACH as he and wife Debbie received bereavement counselling after son Stanley died when just 18 months old in 2012. He is currently one of EACH’s Trustees.

She said: “What an incredible amount of money.

“Our thanks and best wishes go to everyone at Gog Magog, especially captains Gareth and Sharon.

“They and the club’s members did an amazing job raising so much and it will help us continue providing care and support for children and young people with life-threatening conditions, and families, across Cambridgeshire and East Anglia.”

EACH has three hospices – one at Milton, near Cambridge, one at The Treehouse, in Ipswich, and one at The Nook, near Norwich. 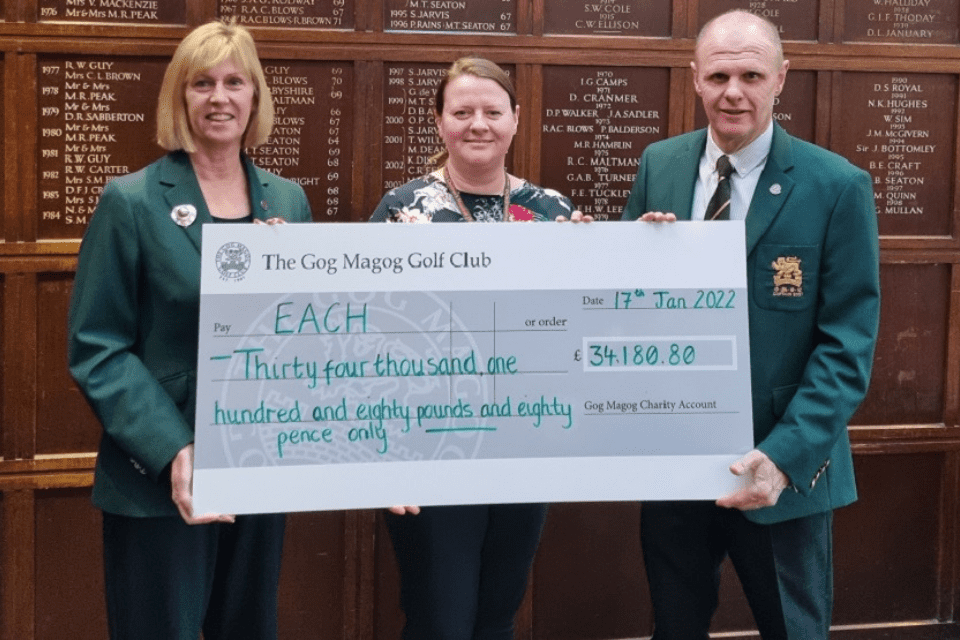