A leading children’s charity is celebrating a record-breaking week of eBay success.

East Anglia’s Children’s Hospices (EACH) runs a fast-growing ecommerce operation to support its work caring for children and young people with life-threatening conditions across Norfolk, Suffolk, Essex and Cambridgeshire.

It runs in tandem with the charity’s successful bricks and mortar shops, with 44 premises scattered across East Anglia.

EACH’S eBay sales have become a vital income stream and there was a recent week of record-breaking success, selling goods worth £12,281.

In total, 539 items were sold with an average selling price of nearly £24.

It comes on the back of January being the second most successful month so far, generating £40,311.

Among the items sold were several quality, high-quality ones, including an OMEGA watch that went for £1,370.

“There have been lots of individual successes and the whole operation is going from strength to strength.

“The pandemic had an enormous effect and brought a wider audience and variety of customers to our online shop.

“COVID forced people to shop online, including those who may never have thought of doing it before.

“As a result, we’ve noticed a huge difference and got a really loyal base of supporters.

“These people have instant access to all our listed items and benefit from the wide range of products we sell.

“Then you get some nice surprises.”

“Everyone has got behind our eBay operation and 40 of our shops have at least one eBay Champion,” added Scott.

“These are people with knowledge and enthusiasm that identify sellable items, take photos of them and list them on eBay.

“When that item is sold, it’s sent to us to pack and send.

“I’ve been working here for just over two years and am very proud of how the operation has grown.

“It’s been incredible and while sales have doubled, it’s also meant twice as much work packing items and sending them out. As a team, we’ve had to keep up so it’s been hard work but very rewarding.

“Everything works well and the whole retail side of the charity is very supportive of what we’re trying to achieve.

“My goal is to make half a million in the next financial year and I truly believe that’s achievable.”

EACH relies on volunteers and is always on the lookout for extra helpers.

One of its three eBay volunteers is Andy Temple, who uses his vast knowledge of cameras and photographic equipment to identify sellable items.

The 69-year-old, a design engineer during his working life, said: “It’s been a lifelong hobby, since I was ten, and volunteering here is something I really enjoy.

“I’m retired and when you reach that stage of your life I believe it’s very important to keep some kind of structure.

“If not, you lose the impetus to get out and do things and that’s why I love being involved.

“It keeps me going and I like using my knowledge of cameras to make money for the charity.

“I trust myself to see the potential in items and list them for a proper, realistic price.

“We also sell memory cards and that’s another very good way of making money. It’s all about maximising takings.”

“You can offer a shift of two to four hours per week or fortnight, or offer more occasional support as and when you can,” added Scott.

“Whatever time you have to offer, we’d love to hear from you.

“Get in touch for an informal chat about the roles and to book a taster session.”

To enquire about volunteer opportunities in the Thetford area call 01223 205183 or email volunteerservices@each.org.uk 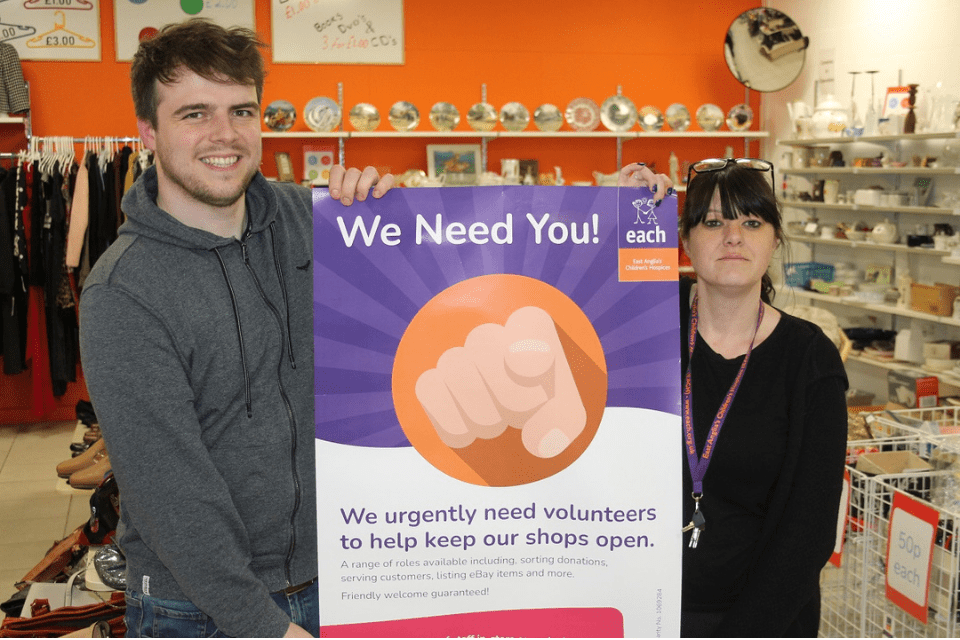