Community-spirited residents are ‘flabbergasted’ to raise more than £2,000 for EACH

Residents of an aptly-named Lowestoft street showed their community spirit to raise more than £2,000 for East Anglia’s Children’s Hospices (EACH).

People living in Christmas Lane joined forces to adorn their houses with festive decorations and illuminations. The end result was like a scene from a Hollywood movie.

Resident Denise Bretton: “We were absolutely flabbergasted to raise so much.

“Everyone was so supportive, putting £10 and £20 notes in our buckets and also donating via our Just Giving page. This included someone generously giving £50.

“People really engaged and we couldn’t have been more delighted with the reaction.

“We go to a lot of effort and spend a lot of money, but it’s all worth it and fair to say we’ve smashed our fundraising targets.

“It’s lovely to be part of such a feelgood news story which really seemed to capture people’s imaginations.

“Our little community has come together to support a special cause and we’re lucky to be so close-knit and have this togetherness.

“We all feel very proud.”

The street, featuring thousands of twinkling lights and everything from stars and bells to snowmen and Santas, was illuminated on 1st December.

The lights were then on from 3.15pm until 10pm every night, to help spread the festive cheer and raise vital funds for EACH.

The display has been taking place for years but this is the first time the team have raised money for charity.

Already plans are being made for next Christmas.

The residents behind the scheme have already decided to once again raise funds for EACH, which supports families and cares for children and young people with life-threatening conditions across Suffolk, Norfolk, Cambridgeshire and Essex.

It has three hospices – in Framingham Earl, near Norwich, at The Treehouse, in Ipswich, and at Milton, near Cambridge.

Resident Paul Gray: “We had lots of very positive feedback and everyone resonated with EACH.

“No-one questioned our choice of charity and every single person agreed it was a very worthwhile cause.

“We overheard parents explaining why it’s such a special charity, because of what they do to care for children and young people with life-threatening conditions.

“Hopefully next year we can raise even more money and that can only be a good thing for EACH.”

Residents of Christmas Lane hope even more nearby houses get involved next year and already have a date booked for their summer barbecue to plan their 2022 display.

Laura Southcott, EACH Fundraising Assistant for Norfolk, visited Christmas Lane to receive a cheque from residents on Friday.

She said: “It’s an extremely kind gesture from the people of Christmas Lane.

“Residents go to so much trouble, giving up days of their time and spending their own money to create something very special and magical.

“The money they have raised is a magnificent amount and will help us provide care and support for children and young people with life-threatening conditions, and their families, right across East Anglia.” 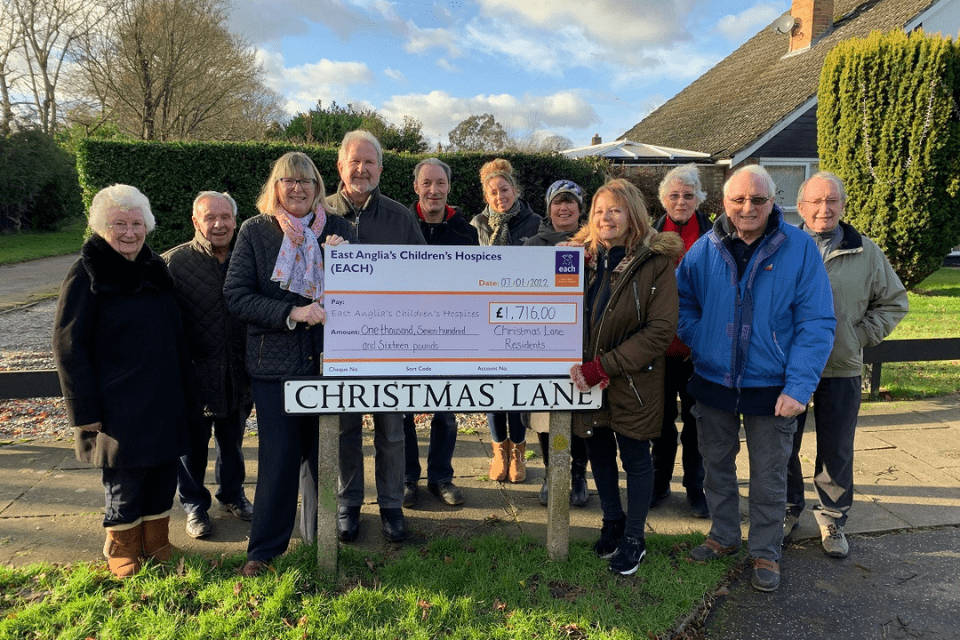 We’re lucky to be so close-knit and have this togetherness.